So the web was abuzz yesterday over some articles focused on Twitter’s “trending topics” feature, in which the most popular words, phrases, hashtags and such are automatically listed in your sidebar, showing you what’s getting the most chatter on the service in near-real-time. In this case, the “trending blog post” was this one: Why Twitter Needs to Do More to Save Trending Topics.

The article goes into what trending topics are and how they’ve been heavily gamed in the past (and present) to get certain topics bubbled up to the top of the list. The writer, Adam Ostrow, also suggests some options of what Twitter could do to fix the situation, namely:

These are not solutions to the core problem.

The core problem is what Ostrow points to at the end of the article:

…as a company that’s stated goal is to “[ask] what’s happening and [make] the answer spread across the globe to millions” and has the power to shape public discourse, Twitter needs to do more to balance what its diverse set of users want with what it should see as a responsibility to be a comprehensive guide to what the world’s talking about.

Ostrow, however, points out in the paragraph before this one that editors should not have a hand in shaping the trending list — it should be an expression solely of the users, as calculated by algorithm, and that’s what makes Twitter (and other services) unique.

You sure about that? 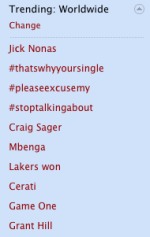 Because here’s the list from late Monday night, with my own explanations…

Trending topics lists today are sometimes interesting, but mostly useless because they get clogged with these nonsense games and deliberate attempts to reshape the topics or traffic around them. There’s limited newsworthiness or discussion dynamics. We need an edited list, crafted through a combination of algorithm and human review.

Twitter can continue to share a raw trending topics algorithmic listing for the public. That’s fine. It’s sort of mathematically interesting. But we also need an edited list, in which the trending topics raw numbers are passed through a human filter and lightly organized.

Using the list above, you’d get a cluster of Lakers / Suns basketball and the Argentinian singer, each with a corresponding list of tags or words that seem to be closely related. But then the editor would delve deeper into the data, exposing more human conversation and topical interest amidst the sea of “gamed” tweets.

The result? A rapidly-updated (though not real-time) listing of what people are discussing online, presented in a way that makes sense and shows the meaning behind the tweets (where possible).

How to do it

You could also get fancier, with more sophisticated algorithms, a broad crowdsourcing process for topic analysis and aggregation and so forth. The advertising could pay for the editor costs and then some.

I know engineers want to code artificial intelligence into all the systems out there to make them scalable, but sometimes that just doesn’t get the job done.

Today, I ignore the trending topics because they’re useless and sometimes even offensive. But a well-curated / well-edited trending topics list would be fascinating. Twitter could make money from the listings, of course, and the service would be more relevant to more people more of the time.

Twitter: you can keep the raw numbers, but we need a useful listing of what everyone’s talking about.

tech nerd, media critic, snarkmaster > Professional persona via #LinkedIn and #Medium > Private persona via #Mastodon and #PixelFed > My hat tips and finger wags are my own View all posts by @jmproffitt