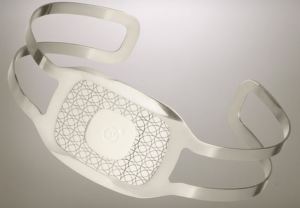 The quantified self movement keeps chugging along, with updated tech announcements coming from both Withings and BodyMedia this week.

BodyMedia will introduce an updated version of their arm-mounted health data collector, theoretically shipping in August. The new version is quite a bit more attractive than the current one. It measures activity / movement, sleep patterns, and calories burned. It competes with the Nike+ FuelBand, the FitBit One, and others.

Withings, who first arrived on the scene with a Wi-Fi weight scale, is introducing an updated scale — the Smart Body Analyzer — but also an activity monitor — the Smart Activity Tracker — to compete with FitBit and all the rest. It’s not clear when these products will ship, though Withings is claiming a Q1 release.

The Smart Body Analyzer is the most interesting addition to the field, as it’s bringing more sensors to the party. This thing will get your weight and body fat percentages, like the current model, but it will also capture heart rate and — this is the amazing bit — air quality, in terms of CO2 levels in the ambient air. Captured data syncs via Wi-Fi or Bluetooth, and naturally goes into their cloud-hosted data monitoring system and smartphone apps. You can sync over to Microsoft HealthVault if you like.

Personally, I’m wearing a Nike+ FuelBand right now and I love it. It actually think the FitBit is more accurate, but the FuelBand goes on your wrist and stays there — you don’t lose it off your belt or send it through the wash in your pants. The only one I really want to try out is the Jawbone Up, which has more features than the FuelBand, but lacks the FuelBand’s integrated data display.

Meanwhile, check out this article from AllThingsD on the trends in the space: