Steve Jobs changed my world and yours too. We’re unlikely to see anyone like him again in our lifetimes.

If you’re not reading Horace Dediu’s asymco, you’re missing out on the best mobile systems analysis and numbers in the business. I took the time to comment on his recent How sticky is Android article and I’m reprinting here for the record.

I appreciate the “sunk cost” notion [of smartphone stickiness], but I think for most users in most cases, that’s a non-issue beyond any given 2-year period. When the phone costs $100 to $300 subsidized but your monthly cost is already $75+, the hardware cost is not a barrier to switching. In fact, anyone that doesn’t upgrade their phone — and posisbly switch platforms — at the turn of their contract is leaving money on the table, based on the way carrier contracts work today. I routinely talk with friends whose contracts are coming up and they usually consider their options. Some are loyal to a platform, but most aren’t.

What seems to create loyalty or stickiness are only a few factors, and rarely are all at play for any single user:

By the way, on #3, there hasn’t been enough time for most people to have owned both platforms yet. The first true smartphone was the iPhone in mid-2007. Android with comparable features didn’t come until much later. We’re only at the opening of 2011 — only 3.5 years into the iPhone and 2.5 or less into Android. Even if you bought an iPhone in July 2007 and bought an Android in July 2009, only this year would you be eligible to switch back. That’s not enough competitive time to draw conclusions yet on stickiness.

I love John Gruber. So smart, so deeply into Apple’s mindset. Great commentary here from the recent Macworld event in San Francisco. He talks about 10 issues he think Apple needs to deal with, one way or another. Great stuff.

Apple endured its darkest days during the early 1990s, when the PC had lost its original magic and turned into a drab, utilitarian tool. Buyers flocked to Dell’s cheap, beige boxes. Computing back then was all about the programs. Now, computing is all about the programming – the words and sounds and pictures and conversations that pour out of the Internet’s cloud and onto our screens.

I’m not so convinced — yet — that the iPad is the answer to a bunch of different needs. It’s clearly a 1.0 product and it feels like Apple has withheld some key technologies and features for the next revision.

But if Apple delivers on a few more functions — video conferencing, textbooks and a sort of cloud-based “docking” and sync — then the fate of the PC is fairly well sealed, at least for personal use.

When the White House announced that President Obama would deliver his State of the Union message on Jan. 27—the same day Apple was planning to unveil its new tablet computer—many of us at Slate cringed. “What is Obama thinking?” one of my colleagues joked. “He’s going to be totally overshadowed.”

The idea of a product rollout trumping the president’s annual speech to Congress does seem funny. Maybe the tablet will be a bust. Maybe Obama will rock the world. But the opposite is at least as likely. This isn’t Obama’s fault. It’s just the way the world is going: Technology, as a driver of social change, is overtaking politics.

Sometimes it’s hard to take a wide angle view of what’s happening in our society, whether within our national borders or planet-wide. This piece by Slate’s William Saletan explores just how pervasive and entwined our First World society is with technology. It’s changing how we act, how we think and, of course, how we communicate and share ideas.

And for me, the Apple tablet introduction totally overshadows the pronouncements of our President.

Apple’s tablet will actually change the world, one way or another. Our President, a year into his floundering administration? Not likely to change much.

Basically, if you build anything even remotely innovative these days, you’re going to get sued for patent infringement, probably multiple times. It’s become a massive tax on innovation, rather than a lever for innovation.

from: Nokia Getting Killed In The Smartphone Market… So Of Course It Sues For Patent Infringement

Previously I predicted that the iMac and Mac mini product cycle would come around in March/April. It was March 3 this year. Nailed that prediction, thank you very much.

But I also predicted Mac Pro cycle would center on the traditional WWDC timeframe of June. Well, those were seriously changed up on March 3 as well, so that one I screwed up.

I also suggested, though not too strongly, that AirPort products might go along with laptops, but that’s not what happened this time. On second thought, the AirPort stuff probably won’t have a regular cycle anyway — update when there’s something worth updating (a new IEEE standard, a new feature worth touting, etc.).

One prediction I’m toying with… the WWDC slips to July or August. That would offer more iPhone prep time each year, in the midst of other product launches and revisions.

In any case, I’m delighted with the revised products. Sure could go for an 8GB iMac!

From here, at the end of Apple’s participation in the Macworld conference entirely, I suspect we will see them develop a revised annual cycle of product updates and announcements in various categories. What might that calendar look like?

Well, first off it won’t be a rigid calendar — it will have a give-and-take that’s more helpful for software development projects. Dumping Macworld gives them control over both the size and timing of each announcement, rather than being tied to venues, dates or formats dictated by a third party. That said, Apple would be well-advised to bite off projects in 12-month increments. Projects that run much longer than 9 months can easily start to lose focus and experience endless scope creep.

In any case, I’m betting on a roughly annual product cycle that might look something like this…

END_OF_DOCUMENT_TOKEN_TO_BE_REPLACED 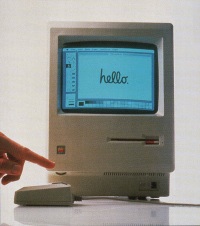 Do you remember the Apple II series of personal computers? I certainly do. I got my first one in January 1983 (the Apple IIe) and it was a revelation. Back then the Apple II dominated the personal computer space (IBM was just introducing the first IBM PC). It was a serious cash cow for the new wonders of Silicon Valley: Steve Jobs and Steve Wozniak.

But even in 1983, in the peak of this tremendous success, Apple was reinventing the personal computer. They were secretly inventing the Macintosh, which was introduced a year after I got that Apple IIe in January 1984 (with the famous Superbowl ad).

Developing the Mac was a massively expensive proposition. New chips, new software, new case designs, a mouse, even a brand new 3.5″ floppy drive developed by Sony but still considered cutting-edge and risky. Everything called for clean slate development in order to get it all just right.

So what funded this engineering miracle? The successful and highly profitable Apple II series. And guess what — the Mac wasn’t profitable at launch. That first year was deadly. Apple introduced a $2,500 computer ($5,100 in 2007 dollars) that had two software programs: MacPaint and MacWrite, and it wasn’t compatible with the growing library of Apple II software titles.

Check out this brief video (43 seconds) of Guy Kawasaki recounting how the Mac team was funded by the Apple II team, and the considerable tension this created:

I often think of the Apple II / Macintosh example when conversations in public media circles turn to the question of how will we pay for this new media stuff that doesn’t make any money and takes money out of the profitable broadcasting business. Newspapers and the music industry are also great analogies for public broadcasting.

It takes real leadership, real courage to deliberately take cash from a profitable and successful unit and sink it into the next big thing, even if it takes years for it to pay off. Plus, you have to deal with the political pressures to stop funding this financial black hole from the “reasonable” business people all around you (on the board, on the management team, in the community, on the staff). As I look at my own public media business today, we’ve not even begun to seriously tackle the challenges of the new media world — chiefly because “Apple II” folks are in charge. I often wonder whether we should give up trying to reform the core of the company (a la Ideastream) and simply fund an external unit that can focus on the new media challenge without interference from the traditional “cash cow” part of our business.

The one example of “put it outside the core” I know of in the public media world can be found at Chicago Public Radio. Their Vocalo project (as described by Robert Paterson), is an external unit in every sense of the word. They have separate facilities, a new name unaffiliated with the old name, a separate budget, different leadership, different content and business models, etc. It’s a fascinating approach, and it mimics the Apple experience.

But I’m wondering… is anyone else in public media doing this? Who else, if anyone, is creating distinct subsidiaries for innovation? Is anyone else willing to spend their Apple II money on their Macintosh project?