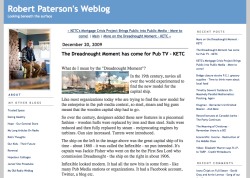 Run, don’t walk, to Robert Paterson‘s blog to read his new post on the transformation in progress at KETC in St. Louis.

No one knows exactly what forms public service media companies will take in the future, and it’s likely that several successful forms will appear. But KETC looks to be the first in the nation to have commissioned the construction of a new model.

Paterson has been working with KETC since before the launch of the Facing the Mortgage Crisis project, which started at KETC and then expanded to 30 more public broadcasters across the country with the help of the CPB. He’s been lucky enough to work with CEO Jack Galmiche and crew and to see this transformation up close. The plans — physical and logical — are remarkable.

What KETC is doing is revolutionary in the public broadcasting world. While the particulars may not fit every station nationwide, the themes should. Whether or not each element in the plan is “perfect” is irrelevant — the most important thing is that they’re experimenting, all within a reformulated goal. KETC is getting passionate about public service media, and not merely public broadcasting.