Back in mid-2007 I deployed my first instance of Google Apps, replacing a Microsoft Exchange 2003 server. It was a controversial choice back then — Google Apps was still pretty new and it wasn’t yet clear whether Google was going to stick with the platform and build it out. But there were several deciding factors that pushed me to an Apps deployment:

We made the switch, I uploaded a bunch of mail using Google’s then-primitive migration tools,  and I put everyone onto the web-based interface — no Outlook allowed. We did trainings and I spent a lot of time helping users get acclimated to the new way of doing things. This was before drag-and-drop email attachments in Gmail. It was before full compatibility with external calendar invitations. It was before Chrome.

And I was immediately hooked. 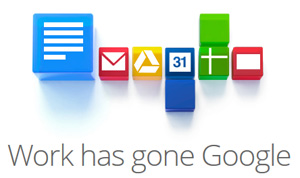 From an IT perspective, this Google Apps thing was awesome. There were no servers to own, nothing to back up, nothing to manage — aside from creating and deleting accounts. The users had far more space than they’d ever had (7GB at the time) and far more space than I could have ever offered locally at a reasonable price. The system was accessible everywhere, and no matter where you got your mail or looked at your calendar, it functioned the same way. And, as a nonprofit, it was all free! We even started using Google Docs right away, sharing selected spreadsheet data with remote workers and volunteers, allowing for real-time collaboration that at the time was mind-blowingly simple yet powerful.

Since then the Google Apps platform has matured with better features, a more homogenized interface in the apps, better administration tools, more reporting, more granular controls, and great (paid) add-ons for email archiving and spam control. And since then I’ve deployed Google Apps 4 more times, not to mention personal use. My most recent migration was last year, again dropping Microsoft Exchange 2003 and Outlook to go all-cloud all the time.

And then there was this past weekend.

After managing and evangelizing Google Apps all these years, I stumbled across a certification program for Google Apps nerds like me: the Google Apps Certified Deployment Specialist. So I dug through the Study Guide, re-read a lot of stuff I knew, learned a few new tricks Google has developed in the last couple of years, and paid my testing fee.

The weird part was the testing method. Rather than send you to a local testing center — where you might sit for Microsoft or Citrix or VMware or other vendor exams — this one is done at home or in your office. You can take the test anywhere you have a live Internet connection, a Windows or Mac machine, and a special USB webcam they make you buy. Total cost is about the same as those other exams, but you can schedule it on weekends in evenings and take it at home. They proctor the exam through the webcam and special software.

It worked great. The only thing I was “corrected” on during the exam was the fact that I started to read some of the questions out loud, to puzzle them out audibly. That’s verboten, probably because they fear you’d read the questions out loud so you could either record the questions (and give them away to others wanting to take the exam) or ask someone else nearby to provide an answer. It’s too bad, because I like to “talk out” technical solutions. Oh, well.

61 questions after starting, I had passed the exam, so now I’m certified! It’s the first major cert I’ve picked up since the “good old days” of Windows NT 4 and Lotus Notes and Domino. And it’s fun to have a Google certification, perhaps because it’s so rare. My certificate was numbered “1298”, which suggests there were less than 1,300 people certified when I took the exam. That’s cool — I’m in a group smaller than my high school census (except we’re all certified Google Apps pros!).

Can you use Google Apps in a healthcare environment?

I may need to address this further in a future post, but the short answer is yes. People freak out about HIPAA (as they well should) but the key thing to consider is how you use your email system. Bottom line: If you don’t store or share PHI (protected health information) in your email system, then HIPAA rules don’t apply. And for those that are using email systems (of any kind) to share or transmit patient data, I have a question: Are you out of your mind? Email is a promiscuous platform by design — it’ll “sleep” with anyone and it’s 1 degree away from every email account worldwide — so why would you ever push patient information through it? If it helps, I’ve actually addressed the Apps/HIPAA discussion elsewhere before.

Sidebar: I may also have to write a post someday (really a rant) about email footers with lots of legal language in them — a silly practice that has no force of law behind it. If you want to put in a “please don’t share this” message down there, that’s cool, but stop trying to create unilateral contracts with your footers — that’s not a thing.

All that said, I do think Google needs to rethink their stance on signing HIPAA Business Associate Agreements (they won’t sign them). They either need to start signing or they need to post a definitive position paper on HIPAA issues related to Google Apps. Microsoft has shown a willingness to sign BAAs for Office 365 services, which makes their service more attractive, despite their downtime problems. Google has done a good job addressing the overall security of Google Apps, but they need to go a step further, to assuage the fears of healthcare executives and Boards that don’t understand technology very well.

For now I’m a happy Google Apps administrator, still learning, still sharing tips with users new to the platform. Oh, and I’m a Certified Deployment Specialist, of course! So if you’ve got questions about going Google in your healthcare environment (or any business, really) just let me know. I can answer some questions in the comments or we can take the conversation offline.

6 thoughts on “When it comes to Google Apps, I’m certifiable”